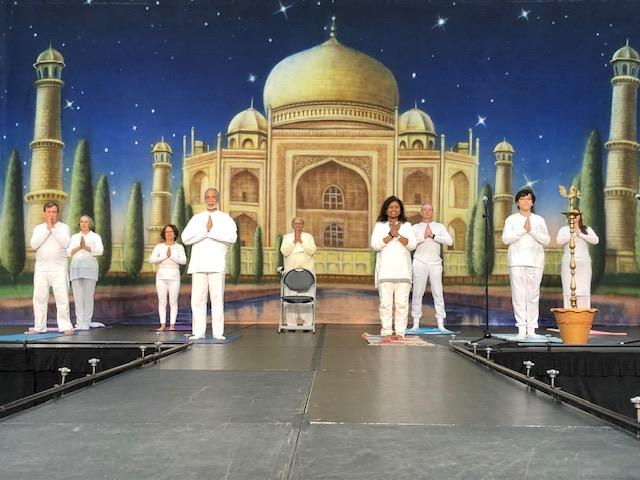 Dr. Dilip Sarkar led a Yoga Therapy session at Chesapeake Health Camp on May 4, 2019 in service to an annual “Day of Giving” to the Hampton Roads Community. This free medical clinic (dental, vision, and general health) was conducted by the Remote Area Medical Clinic (AAPI-HR Association of American Physicians of Indian Origin) and the Hindu Temple of Hampton Roads, along with the help of 450 dedicated volunteers.

About 45 friends, students, and organizers of the weekly yoga therapy sessions that convene on Sunday evenings at the Olde Point Cove Clubhouse in Poquoson, Virginia gathered together on the evening of April 6, 2019 to share a festive and celebratory meal. The occasion marked the tenth year of yoga fellowship organized and served over time by Adarsh and Pat Deepak, Dilip Sarkar, Abha Gupta, Ganapati Myneni, and others. Adding to the enjoyment of the gathering was the opportunity to see and reconnect with friends and acquaintances who had not been regular attendees in recent years! Thank you to all who participated and helped to organize this happy event! Special appreciation to Pat Deepak, who did an amazing job with organizing, setting up the venue and setting the table for the food. Her culinary contributions were also much enjoyed – rice pilaf, carrot pudding and lentils, in addition to all the food that was catered! Dr. Gupta was the invited speaker on “Yoga Therapy for Healthy Aging” at the Community Forum on Aging sponsored by the Peninsula Agency on Aging (PAA) on March 6, 2019 at the Hampton Roads Convention Center. She conducted a chair-yoga session for about 300 registered people from various walks of life.

Dr. Sarkar was invited as a guest speaker to the at Sri Siva Vishnu Temple (SSVT). Dr. Dilip Sarkar at the First International Day of Yoga at National Mall in Washington D.C. in June. The event, which was sponsored by the Embassy of India, Washington D.C., and Friends of Yoga, saw Dr. Sarkar and Ambassador of India in US, Arun Singh, opening registration for Worldwide Certification Exams by CYAI (Council for Yoga Accreditation International), introducing Dance Yoga and yoga teacher training for Patanjali Yogpeeth. In September 2013, Dr. H. R. Nagendra (center), a former space scientist at NASA and Harvard consultant and the current Vice-Chancellor and director of the premier yoga research university, S-VYASA (Swami Vivekananda Yoga Anusandhana Samsthana), visited the Virginia Hampton Roads area to present current research on yoga and health, where he met with some of the editorial team members of Yoga Setu. Accompanying Dr. Nagendra was Dr. Alex Hankey, a distinguished physicist and researcher of Vedic Sciences at SVYASA.

With the aim of reaching out to the global yoga community, Dr. Nagendra had stopped by Hampton Roads for a day to connect with yoga practitioners and share his wisdom and views on the Integrated Approach to Yoga Therapy (IAYT).

Dr. Nagendra, a former space scientist at NASA, returned to his native India, changing his field from engineering to human engineering “in search of truth,” as he says. According to him, the search for the ultimate truth through external means (science) did not take him far enough, and that is why he chose to dive deep into his own consciousness in search of reality through yoga. He then proceeded to combine the best of the East with the best of the West, as the venerated yogi Swami Vivekananda had envisioned.

In 1975, with the ideals of Swami Vivekananda in mind, Dr. Nagendra established the Swami Vivekananda Yoga Research Foundation (S-VYASA), which, by now, has published over 200 research papers on yoga and its applications. Along with its research program, S-VYASA also includes a unique Yoga Therapy Health Center that includes both a residential facility and a Yoga University for student training .

During his visit, Dr. Nagendra shared clinical research reports on the positive effects of prāṇāyāma (yogic restricted breathing) techniques and āsana-s on patients with asthma, diabetes, hypertension, metabolic disorders and cancer. He emphasized a holistic way of treating diseases and preventing ailments to promote positive health.

The thought-provoking lectures presented by Drs. Nagendra and Hankey were truly enlightening for the 25 plus yoga enthusiasts who attended.

Acknowledgements: The visit of Drs. Nagendra and Hankey was coordinated by Dr. Dilip Sarkar, Chairman of TI School of Integrative Medicine (SIM), with the help of Dr. Rajan Narayanan (TI Professor, and Executive Secretary, Life in Yoga) who drove our distinguished guests from Washington DC for dinner and lectures at the home of TI Chairman, Dr. Adarsh Deepak and his wife Pat Deepak, in Poquoson, VA. Our guests were hosted by Dr. Dilip and Shikha Sarkar at their home in Norfolk.